Be proactive in keeping up with ever-evolving ASME Standards Best known for constantly seeking to improve the safety of equipment used in the manufacturing and construction of boiler & pressure vessel, The American Society of Mechanical Engineers (ASME) Boiler and Pressure Vessel (BPV) Code is the most widely adopted standard to ensure that pressure equipment after construction, can be operated safely and reliably.

The ASME Boiler Code was first published in 1914 and has been expanded to include rules in design, fabrication, and testing of pressure equipment. To many that are familiar with the acronym, the ASME BPV Code serves as the most referenced code for local standards in various countries mainly because it has been used by manufacturers, designers, and inspectors worldwide.

Though quality is addressed by the ASME BPV Code, it is a safety standard. ‘Risk’ to lives and property is inherent with pressure equipment (Boiler & Pressure Vessel) which requires a qualified and objective third party inspector that can verify that ASME Code requirements have been met. Financial institutions and insurance companies also have to consider risk on their investment due to non-compliance with the Code/Standard.

Just like ASME’s founding purpose, TÜV Rheinland is in the business of safety and compliance to a standard, where third party verification, advisory services, plus educating organisations and governments in the successful compliance of its codes and standards is of utmost priority.

We contacted our ASME expert, Mr Carlito Banate, to give us his take on some of the key challenges that he faces, along with some of the aspirations that he has, working with TÜV Rheinland.

According to him, getting government bodies to be aligned in understanding the importance of certification in compliance with the ASME Boiler & Pressure Vessel Code (BPVC) is paramount. With them on board, it will be easier for potential customers, government bodies (jurisdiction), power plant owners, industrial plants, manufacturers, mechanical engineers, and insurance companies to understand how the ASME Code of compliance can contribute in abundance to the safety of equipment and the people operating them.

While introducing new equipment and machinery is fairly easy, downloading ASME Code knowledge to manufacturers’ inspectors involved in the fabrication process and quality system implementation is another story. Conducting regular trainings/workshops for new quality control personnel and inspectors coming onboard for ASME certification, goes a long way for the longevity of equipment.

What can companies in the region, with ASME in their purview, do in a climate of change? Mr Banate thinks that the ASME Certified Manufacturer’s Quality System will not be affected since manufacturers themselves have the freedom to choose and/or change AIA by following requirements stipulated by the ASME code guidelines.

A key bit of advice he does have for companies and authorised inspectors alike, is for them to constantly be on the lookout for opportunities in refreshing and updating their knowledge according to updates/revisions in ASME Standards.

It is refreshing to note that companies dealing with ASME view investment in testing, third party inspection, and certification as a necessity as opposed to a luxury, seeing as it concerns the safety of lives and equipment – along with the bottom line of their organisations.

As they say, the ‘measure of quality’ is the gap between what you say and what you actually do.

“Having the backing of a global technical authority like TÜV Rheinland is an advantage for the long-term prospects of any company dealing with ASME. Revenue and profits as a result of it, is a bonus, as it should be”, says Mr Banate.

End users and the public can also benefit from a well-tested, regulated, and certified process with TÜV Rheinland, according to Mr Banate, because a ‘peace of mind’ seems to be a common consensus. Their commitment to the highest quality in the construction of pressure equipment and public safety is extremely gratifying. 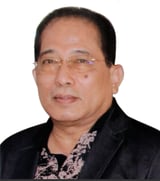 Mr. Carlito R. Banate is an ASME Authorized Inspector (AI) of TÜV Rheinland AIA Services, LLC based in the Philippines and administratively under TÜV Rheinland Philippines Inc., Industrial Services Department. He has provided the required Inspections for ASME Code Certification/Stamping for non-nuclear & nuclear equipment in compliance with the ASME Boiler & Pressure Vessel Code (BPVC) for more than 25 years. Holds a current valid “AI” & “IS” Commission with Endorsements “B”, “N”, “NS” & “R” issued by ”The National Board of Boiler and Pressure Vessel Inspectors” in Columbus, OH, USA.