An updated standard test method to detect azo dyes via the release of aromatic amines EN ISO 14362-1:2017 has been released by the European Committee for Standardization (CEN) in February 2017 and supersedes the previous version EN 14362-1:2012. 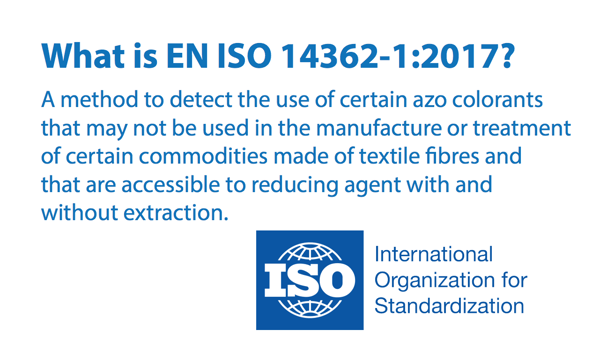 What are the changes?

Compared to the previous version 14362-1:2012, this method shows a few changes in the preparation and extraction of the sample and has been technically revised. The most important changes are:

Azo colorants in textile and leather articles that may come into direct and prolonged contact with the human skin are restricted under entry 43 of Annex XVII in REACH Regulation (EC) No. 1907/2006. Aromatic amines which, by reductive cleavage of one or more azo colorants in detectable concentration greater than 30 mg/kg shall not be used.

This new updated method will soon be announced as the standard method to detect azo dyes and colorants in order to comply with REACH Annex XVII for various kind of articles or dyed parts of:

This method is distinguishing between two different types of dyeing processes:

Cotton or other fibers, where the dye is attached to the surface can be processed without further preparation. Polyester fibers, where the dye is incorporated into the polymeric matrix needs an additional extraction step, partially diluting the fiber to extract the dye. The challenge in the development of this testing method lies in the combination of both steps, especially for fiber blends.

What does the removal of the combined method mean?

In order to have a streamlined process in the lab, a so called ‘combined method’ was developed in 2012 to allow the removal of one extraction step for fiber blends, which historically always needed two extraction steps, due to the different dyeing processes of natural and synthetic fibers. The past years have proven the combined method to be problematic in certain cases. In the 2017 version man-made fibers undergo an additional extraction step before the actual cleavage, whereas natural fibers can be cleaved directly, this means that for fiber blends two separate preparations steps need to be carried out, similar to the pre-2012 method. In consequence this means the return to a more complex, labor- and instrument-intensive analytical process.