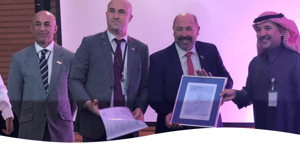 TÜV Rheinland Middle East, mandated and approved in Saudi Arabia by the Kingdom’s Public Transport Authority in its role as an Independent Competent Person (ICP) organisation, completes a major milestone for the global testing, inspection and certification organization.

Since securing its first contract with the Saudi Railway Company (SAR) in 2011. TÜV Rheinland as has played an important role the development of the Kingdom’s railway infrastructure.

TÜV Rheinland Middle East has worked alongside the SAR organisation on each phase of the development of its railway network, which is recognised as a critical part of the railway infrastructure serving the Gulf Cooperation Council region which includes Saudi Arabia, the United Arab Emirates, Bahrain, Kuwait and Oman.

The handover of the ICP certificate by TÜV Rheinland Middle East, marked the formal acceptance by the Public Transport Authority of the full implementation of ERTMS – ETCS Level 2 signalling system.

“I would like to congratulate and thank the various individuals and departments at the SAR for their cooperation and support on this process for the last four years. This is a globally significant achievement in the railway industry since, according to UIC data, it means that SAR’s 2,400 kilometer network becomes the world’s longest single line, ETCS Level 2 signalled, mixed freight and passenger service rail network,” said Mr. Riverain.

“TÜV Rheinland has a well-established and recognised expertise in ICP related assessments for railway infrastructure managers and operation and maintenance organisations, both globally and in the Gulf Region in particular,” said Ruben Zocco Director of Mobility – Rail for TÜV Rheinland Middle East

“As a rail safety certification service provider, we are proud to have played a significant role in the assurance process of this extensive network and look forward to participating in the future development of one of our key customers in the Kingdom of Saudi Arabia,” he added.

For more information, please speak to our experts today.