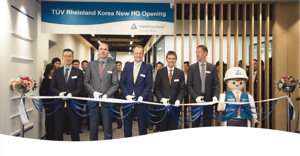 TÜV Rheinland has expanded its footprint in Korea with a new headquarters located in the Yeongdeungpo-gu district in Seoul. The usable floor space doubled to more than 5,200 square meters compared to the previous location. With its investment the globally active testing service provider has set up state-of-the-art laboratories and created space for significantly more jobs than before. “For us as the most international TÜV company, South Korea has been an important location for more than 30 years,” said Dr. Michael Fübi, CEO of TÜV Rheinland, at the opening of the new facility. “We continue to expect very good prospects for the innovative Korean companies, many of which are our customers. In 2017 alone, the economy in Korea again grew by more than 3 percent.”

TÜV Rheinland was the first foreign certification body in South Korea in 1987 and today employs around 150 people in the country. “Over the next three to four years, we want to attract up to 50 new experts and thus further strengthen our already good position in the Korean market”, says Carsten Lienemann, Managing Director of TÜV Rheinland in Korea.

Product testing in the numerous laboratories in the cities of Seoul, Gyeongsan and Changwon is a focal point of TÜV Rheinland's activities. In Korea, for instance, TÜV Rheinland tests wireless technologies such as Bluetooth and Wi-Fi, the safety of electrical and electronic devices, LED technologies, solar modules and air conditioning systems. Other fields of activity include energy efficiency testing, inspection services for industrial plants, vehicle type approval testing for Korean automotive exporters and the certification of management systems in accordance with internationally recognized standards. There is also strong demand for services relating to worldwide market access for products. TÜV Rheinland's more than 8,000 customers in South Korea include major corporations such as LG, Samsung and Hyundai, as well as many small and medium-sized enterprises.