No Internet of Things without broadband

The digital transformation of our lives has long ceased to be a mere vision – the Internet of Things has arrived. One important requirement is full coverage with high-performing broadband. 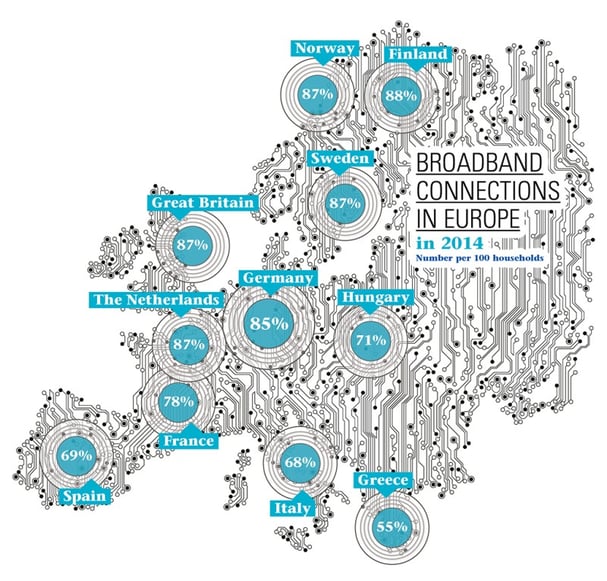 The EU seeks to have established full broadband coverage across Europe by 2020. An average of three out of four homes in the EU already have a fast Internet connection (source: Bitkom 2014 broadband expansion).
Big data, social web – all fairly well known concepts and still important. However the latest buzzwords are IoT, smart home, smart car or digital transformation. This transformation is well underway and has set a huge structural shift in motion.

Welcome to the digital age. Companies are changing the way they think, and transforming their businesses to move them into the digital world. The fourth industrial revolution – Industry 4.0 for short – is presenting its first smart factories, self-organizing production sites where no humans are needed.

As all of the components are connected to each other via the Internet, the machine producing metal blanks knows how to operate independently. Any additional pieces are automatically transported to their corresponding place. And while the finished component is being carried from conveyor to conveyor, it can decide for itself what type and shape of packaging it will require at the end before being shipped. The Internet of Things (IoT) enables processes like these to work.

Cars that drive themselves, networked coffee machines and refrigerators or desk chairs that regulate their own height. Today, around four million devices are already connected to the Internet around the globe. Close to half of these belong to the consumer sector, such as televisions, wristwatches or refrigerators. Their numbers will explode over the next few years.

But in order to ensure the digital transformation and its massive trends can even take place, we need high-performing networks. The EU is striving to achieve full broadband coverage by 2020 – with transfer rates of at least 30 megabits, in some places even more than 100 megabits per second. Germany, for instance, is moving from ISDN to IP in order to provide the necessary network structures and bandwidths. IP is short for internet protocol: the connections for phone calls, surfing, streaming and TV are established via various access, aggregation and transport networks.

The question remains where Europe and particularly Germany currently stand when it comes to expanding its broadband.

When it comes to connectivity, the state of the art of digital technology or the people’s Internet literacy, Denmark, Sweden and the Netherlands rank highest. The EU Commission’s Digital Economy and Society Index places Germany in tenth place. In order to be increasingly fit for the future and achieve full broadband coverage, it is estimated that an investment of 20 billion euros will be needed.

TÜV Rheinland calculated this sum for the German Federal Ministry for Economic Affairs, based on increased coverage for 100 percent of homes with access of at least 50 megabit per second. The money will come from various sources: license auctioning and funds, from local authorities, companies and finally also from consumers.

Although 85 percent of German Internet connections are already prepared for the future, the final hurdles are considered to be particularly expensive and difficult. Especially rural areas are facing huge challenges. Federal regions, counties and municipalities have launched initiatives to support the broadband expansion and TÜV Rheinland has been accompanying several of these programs for years. The experts are intimately familiar with the ICT (Information & Communication Technology) sector and know what potential the current developments have. Digital infrastructure will be a decisive factor in selecting business locations for the industry of the future.

Only broadband can guarantee the attractiveness of an economic location in the long terme, and German companies have big plans. According to a survey, they are expecting an increased turnover of more than 30 billion euros per year due to the digitalization of their value chains.*

At the request of the German Federal Ministry for Transport and Digital Infrastructure, TÜV Rheinland operates the so-called ‘broadband atlas’, a constantly updated geo-information system that shows which regions are already covered and which are not. In addition, the experts provide conceptual and strategic support, and guide the municipalities through the jungle of paragraphs and available funding. They examine which network concepts are suited to which regions and whether synergies – such as cooperation with private telecommunication companies – can be exploited. At the municipal level, it is already apparent what is needed on the German national and European stage: complete broadband coverage by 2020 will only be possible with national and regional cooperation. The suspense continues. Political decision-makers, local multipliers and large and medium-sized enterprises all depend on one another when it comes to laying the much-needed foundation for tomorrow’s digital economy.

Where does the EU’s broadband expansion currently stand?
There are still large differences in the EU, depending on political and financial priorities. While Greece currently has other worries, the Scandinavian countries, in keeping with tradition, are way ahead, having invested in cable-free broadband technology early on. Germany lagged behind for a long time due to its ISDN expansion, which made the transition to broadband technology more difficult.

Can the ambitious plans really be implemented by 2020?
In most, if not all countries. Generally there is a growing understanding that there is no way around this expansion. Broadband is quite simply a matter of maintaining competitiveness now and in the future. Telecommunications providers know this and are now investing huge sums of money in order to offer their customers the best network in a digitally transformed environment.

How is TÜV Rheinland accompanying the broadband expansion?
2020 is just the beginning and our customers will constantly have to re-adapt to technological progress. At TÜV Rheinland we work closely with network operators and companies: from strategic consulting, project initiation, network planning, monitoring and acceptance of the implementation to operating passive and active telecommunication infrastructures. Here, our technological expertise and independence are highly valued. We are a reliable partner offering security and orientation in an environment that is becoming ever more complex.

For more information on our telecommunication and IT testing solutions, please visit our website or contact us to speak to one of our experts.