Schedule a business meeting on your smartphone, and a driverless car will arrive and take you to the meeting site. This future is right around the corner!

Automobiles have always played a big role in the creation of markets and industries. Strong demand for eco-friendly cars has led to the development of hybrid cars, electric vehicles (EV) and fuel-cell-powered vehicles.

The introduction of new technologies such as autonomous driving and wireless technology is leading the automobile industry into a new era.

EVs are the most represented next-generation ve 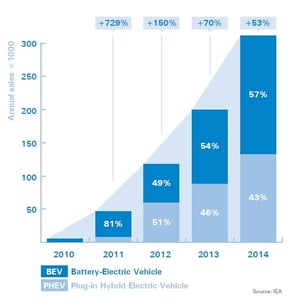 hicles. However, less than 1% of cars sold  worldwide are passenger EVs. The retail price of EVs must drop for them to become popular.

Amongst the Asian countries, EV sales in Japan stood out. However, the shortage of fast-charging stations on highways has resulted in long waiting lines, limiting EV use mostly to commuters.Southeast Asian countries have also begun to introduce EVs. To encourage the market to increase safety and environment-friendly vehicles, the Thai government has introduced Eco-car policy and CO2 based tax system which incentivize the purchase of EVs.TÜV Rheinland is engaged in
evaluating the environmental performance and safety of the ultra-mini EV FOMM Concept One, scheduled to be developed and sold in Southeast Asia.

It is said that autonomous driving systems could be a reality by 2025. Toyota has announced its plan to install automatic brakes in almost all its vehicles by the end of 2017, and an automatic brake system has already been installed in almost half of its existing models. The advancement of ‘connected car’ technology coupled with autonomous driving will bring about a new era of motoring.

The technology required to get to the next generation of vehicles

To promote full-scale use of these new generation vehicles, a variety of evaluation and verification systems will be needed to ensure safety and efficiency, and a neutral testing and certification company like TÜV Rheinland will play an important role.

Kazushi Arima joined TÜV Rheinland Japan in 2013. He has many years of experience in Mobility industry, having worked in one of the largest Japanese automakers and a vehicle certification agency. Mr. Arima holds a Master of Science in Physics.

Find out more about the latest trending topics in the industry our quarterly customer newsletter tuv.communication: