Data from the Ministry of Industry shows no less than 22 manufacturers of lubricants operating in Indonesia. However, when viewed from various variants of lubricant products and brands available in the market, there are 200 companies on the list. 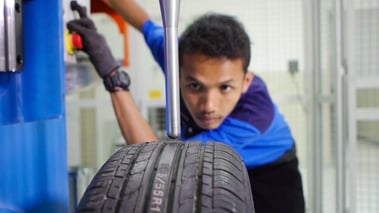 Meanwhile, national oil consumption is at around 850,000 kiloliters, while supply is at nearly 2 million kiloliters. That is, there has been oversupply to the market.

However, in truth, far more important issues to address the flood of lubricant products into the domestic market is the standardization of quality. That is, with the implementation of the Indonesian National Standard, the protection of interests of consumers as well as producers operating in Indonesia.

There have been no formal laws to implement such policies. Therefore, since 10 years ago the government has set SNI for lubricants. Only that the provision is still voluntary and not mandatory.

Therefore, it is time for these provisions to become mandatory, especially in the current economic order within the framework of the ASEAN Economy Community (AEC). With the new order, the flow of goods and capital in and out of countries among ASEAN members are also getting free.

In fact, the total population of this region is as many as 601 million people, with Indonesia the largest contributor to that figure. Moreover, growth in the automotive market still has huge potential for both four-wheel vehicles for passenger, commercial vehicles for public transport as well as supporting the industrial sector, as well as machinery manufacturing sector as factories.

In other words, the potential of the lubricants market in Indonesia is very tempting for anyone who has invested in this commodity. In fact, the trend continues to increase oil supply.

Seeing these facts, an effort to meet quality standards in Indonesia is to be applied strictly. Indeed, in the eyes of international trade, it could be interpreted as an instrument of non-tariff barrier.

However, the implementation of SNI - regardless of any subjective perception and interested parties disclosed the other - it is the norm and tolerated by the rules and conventions of international trade. In any other country this way also applies.

In the eyes of Indonesia, this is an effort to protect domestic industries. Moreover, the sector has become the backbone of the national economy. If that happens, the economy will roll smoothly and economic growth will ensue.