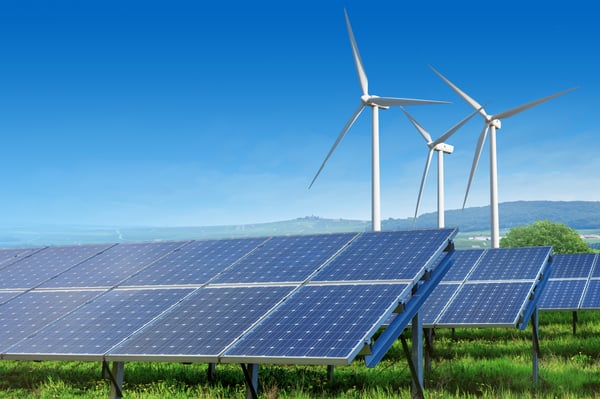 India has set an ambitious target of reaching 175 GW of installed capacity from Renewable Energy sources by the year 2022, which includes 100 GW of Solar and 60 GW of Wind power capacity. Various policy initiatives have been taken to achieve this target. As of December 2019, the total renewable power installed capacity in the country was almost 86 GW.

To meet the day to day increasing load demand, conventional energy sources are no longer a viable solution as they are depleting rapidly. Solar, due to its dependence on sunlight, can produce power only during the day mainly between 8 am and 5 pm. Wind, on the other hand, usually is more during late evenings and reaches its peak at night. Due to this complementary intermittent nature of wind and solar, power production can be leveled out throughout the day with a Solar-Wind Hybrid. With a hybrid, reliability of the grid is improved by ensuring peak power requirements are met.

The introduction of the National Wind-Solar Hybrid Policy has been instrumental in encouraging the hybridization of existing wind and solar plants as well as promoting Hybrid plants in India. Further, the objective of the policy is to optimize and improve the efficacy of the usage of transmission infrastructure and land, which in turn will mitigate inconsistencies associated with the generation of renewable power and help in attaining better grid stability.

The primary aspect of the hybrid plant is the configuration - AC or DC integration and the use of technology. The second important aspect would be related to sizing - which would depend on resource characteristics. In order to achieve the benefits of a hybrid model in terms of optimal and efficient utilization of transmission infrastructure and better grid stability by reducing variability in renewable power generation, in the locations where wind power density is quite good, the size of the Solar PVs capacity to be added as the Solar-Hybrid component could be relatively smaller. On the other hand, in the case of sites where wind power density is relatively low or moderate, the component of the Solar PV capacity could be on the higher side.

According to MNRE, the implementation of a Wind-Solar Hybrid system will depend on different configurations and use of technology.

a. Wind-Solar Hybrid - AC integration: In this configuration, the AC output of both the Wind and Solar systems is integrated either at the LT side or at HT side. In the latter case, both systems use separate step-up transformers and the HT output of both systems are connected to the common AC Bus-bar. Suitable control equipment is deployed for controlling the power output of the hybrid system 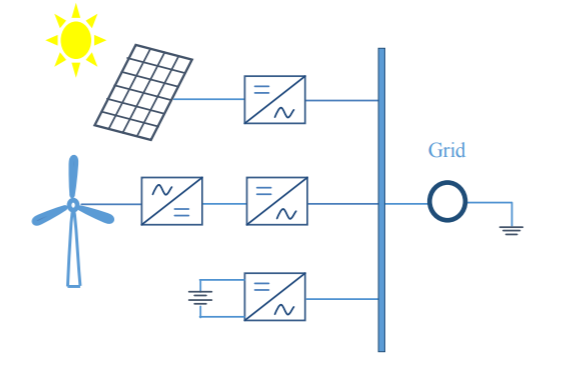 The only advantage of this system is that it is most compatible with the existing transmission framework in India.

b. Wind-Solar Hybrid - DC integration: DC integration is possible in case of variable speed drive wind turbines using converter - inverter. In this configuration, the DC output of both the Wind and Solar PV plant is connected to a common DC bus and a common inverter suitable for combined output AC capacity is used to convert this DC power into AC power. 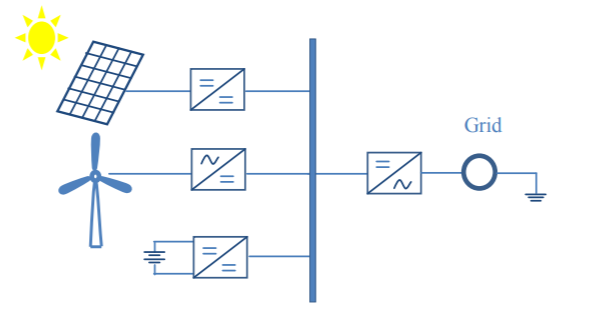 The DC-coupling topology has the advantages of simplified hardware, lower cost and higher energy efficiency.

Optimization is the main objective achieved by minimizing the system cost while maintaining reliability.

Sizing is done by mathematical models to get the best output from the combination. The number of PV panels, wind turbines, battery cells, load profiles, and available renewable resources play a significant role in the sizing of PV-Wind Hybrid power systems. In order to utilize renewable energy cost-effectively, many researchers have studied the algorithm to calculate the capacity of applicable generator units that can constitute a reliable power system at a low cost. Many different sizing methods, such as the iterative method and artificial intelligence method, have been reported to design a techno-economically optimum hybrid renewable energy system.

The battery bank with the total nominal capacity is permitted to discharge up to a limit defined by the minimum state of charge. For a good knowledge of the real State of Charge (SOC) of a battery, it is necessary to know the initial SOC, the charge or discharge time, and the current.

Factors to Consider during Energy Simulations

Apart from individual uncertainties, there are mutual interactions between the two resources that are needed to be taken into account:

The Ministry of New and Renewable Energy (MNRE) released a solar-wind hybrid policy in 2018 which provides a framework to promote grid-connected hybrid energy through set-ups that would use land and transmission infrastructure optimally and also manage the variability of renewable resources to some extent. India is not the only country planning hybrid projects; over 50 hybrid projects of MW-scale have already been announced or are under construction globally, with Australia and US being the leaders. Hybrid Energy Systems can be potential solutions for the electricity problems especially in rural India. However, more exhaustive research is needed on this subject to make it technically feasible and deployable.

Renewable hybrids can play a key role in helping India accelerate the decarbonisation of power generation and lower the cost of electricity generation in the medium term. However, there is a need to ponder on the pros and cons of building new coal-fired plants and renewable hybrids. There is also a need for investors, who are evaluating existing stressed coal-fired assets, to understand the future value and potential of such assets 5-7 years from now. Most importantly, the policy and regulatory environment in India needs to evolve more in order to fully capture the potential of Hybrid Energy.