Today global warming is a major concern across the world. Indonesia, being one of the largest countries in the Asia Pacific, is concerned and constanty looking out to support programs that control global warming. The Ministry of Energy and Mineral Resources is one of the technical Institutions that has responsibilities to implement these programs, besides the Ministry of Environment who is the main driver.

One of the programs in place is reducing the effects of CO2. CO2 is produced from the electricity used at electric & electrical equipment (EEE). Since 2011, the Ministry of Energy and Mineral Resources has regulated energy efficiency labeling for EEE products. The first regulation was on the self-ballasted lamp. This law enforcement has been implemented since 18 June 2015. Now more products have been targeted to be regulated for energy efficiency labeling. The Directorate General of Energy Conversion and Renewable Energy has been set the task of preparing regulations related to those programs.

On 1 August 2016, air-conditioning was made a mandatory product for energy efficiency labeling based on Ministry of Energy and Mineral Resources No. 07 Year 2015. TUV Rheinland Indonesia (TRID) is one of the Product Certification Bodies that has been appointed to issue energy efficiency certificates based on the Decree from Director General of Energy Conversion and Renewable Energy No. 384 K/20/DJE/2015.

The following is the flowchart of application for energy efficiency labeling. 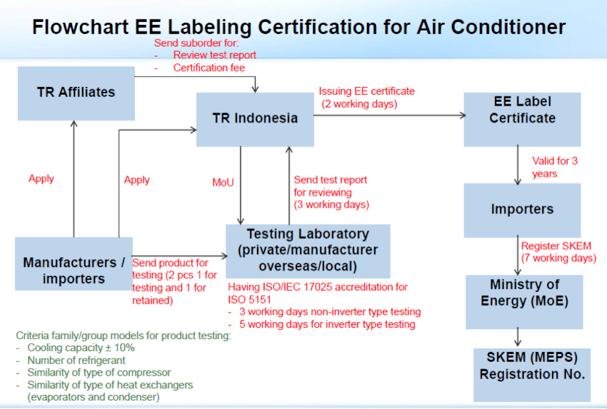 This process will take an estimated 10 working days from the time the sample is received by the testing laboratory. If there is an additional model to be evaluated, then an additional three to five working days is needed. Testing can be carried out at any testing laboratories both in Indonesia and overseas as long as it is accredited under ISO/IEC 17025 and having ISO 5151 as the accredited scope. The accreditation will come from the accreditation body which has signed MLA APLAC/ILAC. Those laboratories shall have an MoU with appointed CB as TRID has. If the manufacturer’s testing laboratory is utilized then the Product Certification Body will conduct witness when testing is done especially if their own brand is being tested.

The following is the summary of the national differences.

These regulation are based on the MEPS (Minimum Energy Performance Standard) with the minimum of one-star or equal to minimum EER 8.53, therefore if the product cannot achieve MEPS standards when tested, then it is deemed to have failed the certification of its energy efficiency. The table below shows the star ratings.

The next programs for energy efficiency labeling will be for the rice cooker, refrigerator and fan. The Ministry of Energy and Mineral Resources will appoint the Product Certification Body which has accredited scope for SNI safety of those products. TÜV Rheinland Indonesia has prepared to get this appointment by being accredited for SNI performance for refrigerators based on SNI ISO 15502:2009 (since 20th April 2016). Additionally, TÜV Rheinland Indonesia will extend the accredited scope for SNI performance for rice cookers and fans. It will be done in due time since the appointment for non-accredited Product Certification Body is only valid for two years.

For more information on our Energy Efficiency Labelling solutions, please visit our website or contact us to speak to one of our experts.