Is car sharing really becoming big business or will it remain a niche product? As the results of a recent study show, it has made no significant impact on the automotive world so far. 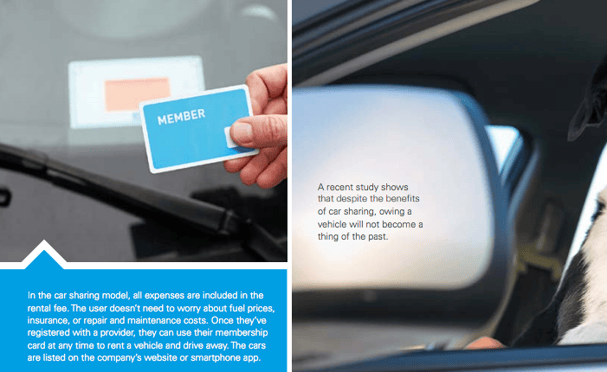 Kevin is a cool guy – basically the typical Berlin hipster. For him, a stylish smartphone and the latest tablet are essential. He gets around on his bike and on public transport. Why would he need his own car?

Parking spaces are in short supply and repairs are inconvenient. If he’s planning a big shopping trip, he does what many city dwellers do: he logs on to a car sharing app and usually finds a suitable vehicle close by.

Is that what the automotive future really looks like? The Internet-savvy Web 2.0 generation might attach more importance to a cell phone than a car, but is having your own vehicle really becoming a thing of the past?

The answer is a clear 'no', according to the surprising results of the latest study, “Car sharing in Germany – fad or challenge for the industry?”, by TÜV Rheinland, its partner company FSP-Gruppe (Fahrzeugsicherheitsprü- fung – vehicle safety testing), and the Cologne consulting firm BBE Automotive.

“Car sharing is becoming an integral part of modern mobility, even if it won’t achieve the enormous growth rates that were sometimes anticipated,” said Professor Dr.-Ing. Jürgen Brauckmann, TÜV Rheinland Executive Vice President Mobility Germany, when the study was presented in Cologne.

Around one million drivers currently use the services of the different car sharing providers in Germany. By the year 2020, there could be three times as many customers. The car sharing model largely owes its success to the strong growth of free-floater services like DriveNow (BMW/ Mini/Sixt) or car2go (Daimler/ Europcar) that can immediately be booked online.

They operate without fixed rental locations: customers collect the vehicles from public parking lots and return them to communal spaces again. Between January 2013 and July 2014, the number of free-floating members grew by 347,000 to 530,000 – an increase of 189 percent. The number of car sharers using a system of fixed rental locations grew by 74 percent to 470,000. In numbers, car sharing offers enormous potential: of the around 80.7 million Germans, about 60 million are in the right age bracket to drive, and 45 million of those have a driver’s license.

However, the study suggests that only seven million drivers can imagine switching from their own vehicle to car sharing. Car sharing is becoming increasingly popular internationally. In 2014, more than 4.9 million people were registered with car sharing providers worldwide.

The majority of them were in Europe, which had more than two million members, followed by North America with almost 1.7 million and Asia with around 1.2 million (source: Frost and Sullivan). The American market research company expects the total number of users to increase to around 50 million by 2020.

For Kevin, the hip method of staying mobile on four wheels is much more than just a fad. But car sharing won’t have a major impact on the automotive world just yet.