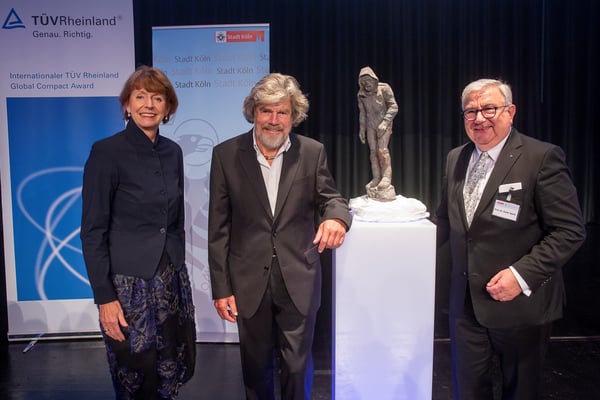 Reinhold Messner has received the 5th International TÜV Rheinland Global Compact Award in Cologne. Reinhold Messner, who hails from South Tyrol (Italy), received the sustainability prize, which has been awarded since 2008, for his life’s work. The award from the TÜV Rheinland Foundation, which is endowed with 25,000 euros, was presented in front of more than 250 guests from business, politics, science and culture in the presence of Cologne’s Lord Mayor Henriette Reker at a ceremony in Cologne’s historic Gürzenich hall.

Prof. Dr.-Ing. Dieter Spath, Chairman of the Board of Management of TÜV Rheinland Berlin Brandenburg Pfalz e.V. and the TÜV Rheinland Foundation, explained the jury’s decision to award the prize to the alpinist: “Reinhold Messner has been an international role model for decades in his consistent commitment to a sustainable approach to the natural areas and mountain peoples of this earth. Through his life’s work, he convincingly and persuasively embodies reverence for creation and the human task of preserving and protecting our planet for ourselves and our descendants.”

Reinhold Messner is considered one of the most famous mountaineers in the world. Born in 1944, the adventurer and alpinist has set himself the goal of protecting mountain peoples with his “Messner Mountain Foundation.” With his concept of the “Messner Mountain Heritage” – a chain of museums in various mountains of the world inspired by him – he strives to reconcile mountain worlds as living space for people with the natural space of the mountains.

The former CEO of the Gerling Group Dr. Jürgen Zech, who is connected to the award winner through the prominent alpinist circle of the so-called Similauner, paid tribute to Messner’s unique commitment: “Environmental protection and nature conservation are an outstanding task of mankind. We experience that now day by day. However, environmental protection and our responses to climate change are equally essential social issues: Environmental protection also means protecting and preserving people’s habitats. It is precisely this link between nature conservation and the lives of people in the mountains that distinguishes Reinhold Messner's work.”

Reinhold Messner expressed his gratitude for the award, saying, “The concept of sustainability combines environmental, social and economic issues. Implementing it is a global challenge. The United Nations Global Compact aims to promote sustainable development worldwide, and I myself feel closely connected to this idea. The award encourages me to continue my commitment – and thus the attempt of people to live in harmony with nature.”

Within the framework of his Messner Mountain Foundation, the award winner assumes social responsibility for mountain peoples. Conceived as help for self-help, the foundation’s work is about ensuring the survival of the locals in the mountains of the Himalayas, Karakoram, the Hindu Kush, the Andes or the Caucasus through agriculture and tourism.

Reinhold Messner is the fifth winner of the International TÜV Rheinland Global Compact Award. With the award, the TÜV Rheinland Foundation honors individuals whose work comprehensively promotes sustainability and environmental responsibility in accordance with the principles of the United Nations Global Compact. In 2017, Dr. Auma Obama, sister of the former U.S. president, was honored for her services to disadvantaged children and young people in Africa. The award winners also include Edda Müller as former chairwoman of Transparency International Germany, entrepreneur Dr. Michael Otto and former politician Volker Hauff.

Special thanks to outgoing Bruno Braun as initiator of the award

As the initiator of the International TÜV Rheinland Global Compact Award, the ceremony in Cologne also honored Prof. Dr.-Ing. habil. Bruno O. Braun for his entrepreneurial and social activities. Professor Braun held numerous different positions at TÜV Rheinland over a period of almost three decades. On June 30 of this year, he retired from his position as Chairman of the Board of TÜV Rheinland Berlin Brandenburg Pfalz e.V.. As Chairman of the Association’s Board of Directors, Dr. Patrick Adenauer, for his part, thanked Professor Braun for his outstanding work and life’s achievements. In the future, Professor Braun will devote himself entirely to his social and cultural commitments. On the occasion of Professor Braun’s retirement, the association’s boards have decided to mark the end of the “Braun era” by establishing an endowed professorship at a technologically leading German university. In particular, questions of future challenges to technology and society in the field of safety foresight are to be investigated. The research results are also to be presented for discussion in a broad-based, regular symposium and further developed in this way.

In order to promote sustainable development in society and business worldwide, TÜV Rheinland has been supporting the United Nations Global Compact since 2006. The initiative to establish the Global Compact at the World Economic Forum in Davos in 1999 goes back to Kofi Annan, then Secretary-General of the United Nations. He called on the top representatives of leading business enterprises to enter into an international alliance to anchor principles from the areas of human rights, labor standards, environmental protection and anti-corruption as minimum standards in their companies and to promote them worldwide.